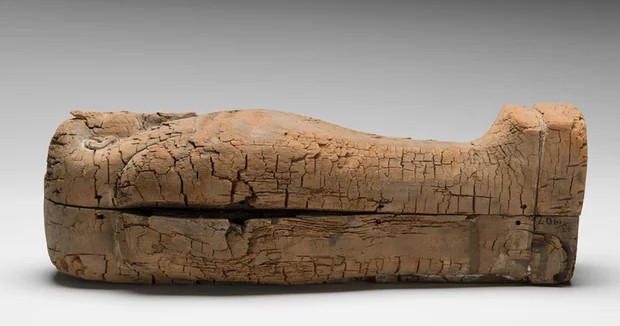 The youngest preserved ancient Egyptian fetus has just been discovered in a coffin.

The coffin was unearthed in 1907 and was previously thought to have contained mummified organs, which wasn’t uncommon, but a micro-CT scan revealed what was inside the coffin wasn’t organs at all, but a tiny fetus.

The coffin itself only measures about 44 cm, is made from cedar wood, and dates back to 600 B.C. After it was excavated from Giza, it went to the Fitzwilliam Museum in Cambridge, U.K.

Even though the coffin had almost deteriorated, the details and intricacy of its design are still there, as is the fetus, which was wrapped in a cloth material. 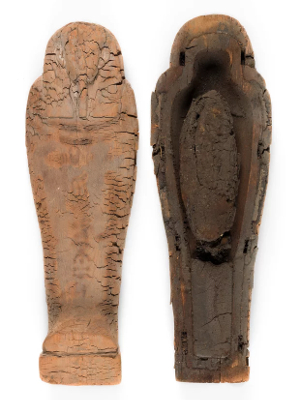 “The images revealed a tiny human body, wrapped in bandages sealed with black resin. The long bones of the legs and arms are visible, as are five digits on both hands and feet. The soft skull and pelvis appear to have collapsed, but despite the damage, curators could put the age of the foetus at no more than 18 weeks gestation.”

The arms were crossed over the chest, like in traditional Egyptian fashion, which indicates how important this fetus was.

The scan cannot determine the sex of the baby, nor any anomalies. The reason why it was miscarried remains unknown.

“This groundbreaking find educates us further still in our conception of just how precious the unborn child was in ancient Egyptian society,” Julie Dawson, head of conservation at the museum, told The Guardian. “The care taken in the preparation of this burial clearly demonstrates the value placed on life even in the first weeks of its inception.”

The remains are currently on display at the museum. 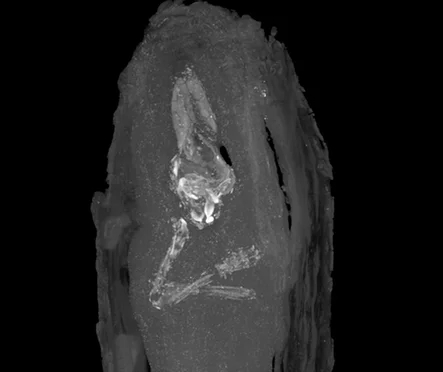