You don’t always have to be big and strong to be a hero.

On May 20, two armed robbers entered a GameStop store in Silver Spring, Maryland. Dressed in gray sweatshirts and pointing guns at the patrons and clerks, the men went for the cash register. But one 7-year-old boy was not having any of it.

In video surveillance footage released by Maryland police, the young boy can be seen approaching one of the armed men and punching him in the chest several times. The boy sustained no injuries according to the NBC News video, but unfortunately was easily overpowered by the suspect and forced to the ground behind the counter.

Still, the boy’s act of courage is generating serious buzz online, with many praising his bravery. 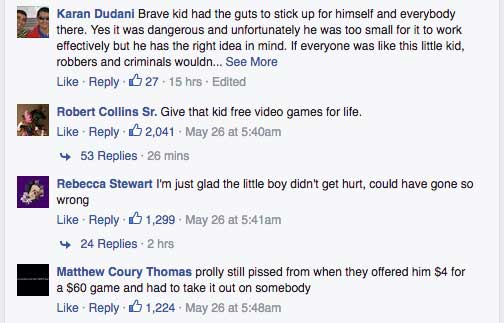 Police have offered a $10,000 reward for information leading to the suspects’ capture. NBC News reported the men escaped with cash and personal items.